Ella Conolly on her first EWS win and recovering from injury

Ella Conolly has had a rollercoaster of a season so far in 2022. Winning the opening round on home soil, podiuming again at round two and breaking her elbow at round three, it’s been a wild ride.

We caught up with the Cannondale rider ahead of EWS Whistler to reflect on her year so far, her recovery from injury and her plans to return to racing.

EWS: Let’s turn the clocks back to the start of the season. How were you feeling leading up to EWS Tweed Valley?

Ella: Before the Tweed Valley, I was just having a really good time on my bike, which for me is always a really good sign. At the start of the season, it’s hard to know how well prepared you are and what sort of pace you're going at compared to your competitors. However, I think I knew in myself that I was riding more confidently than I ever had before.

EWS: Could you put your finger on what contributed to that feeling of confidence?

EWS: How did the race day go for you? Did you know you were onto a winning run?

Ella: My second place on Saturday’s Pro Stage was a surprise. My run felt smooth, but not especially fast, so when I placed second just behind Isabeau Courdurier it was a bit of a shock.

I didn’t check the times at all on Sunday, but people kept saying things to me that made it sound like I was doing well. Despite that, I wanted to stay focussed on my riding rather than the outcome.

EWS: Crossing the line into first place, with just Isabeau Courdurier to come, did you believe you’d done enough to take the win?

Ella: Well, I heard mentions that it was close between Bex Baraona and me, so when I came down and went faster than her, I couldn’t believe it. The thought did occur - maybe I’d just won my first EWS!?!

EWS: Starting the season with a win on home soil, the opening round couldn’t have gone any better. How did that set you up coming into Petzen-Jamnica? Was there extra pressure on your shoulders?

Ella: I don’t think the win changed too much. I thought it would either put lots of pressure on me to win again or take all the pressure off as I’d finally won an EWS. To be honest, it did neither. I tried to take Petzen-Jamnica as just another race and enjoy riding my bike.

EWS: Petzen-Jamnica delivered some massive, physical stages in blistering heat. Did you think a podium was on the cards?

Ella: In short, I didn’t think I’d podium there - I crashed three times in the first stage of practice. Perhaps I came into it with a bit more confidence than usual, but it was so slippery and I kept washing out in the corners. I also crashed on the first stage of the race, so I was really surprised to end the day in third.

I think it’s important to remember that everyone’s in the same situation. If you’re finding it difficult, it’s likely that everybody else is too and it taught me to keep pushing even if you feel like it’s not going your way.

EWS: Things took an unexpected turn during practice at the next round in Val Di Fassa Trentino. What happened?

Ella: There was a corner with a boardwalk entrance and then another one with a rooty step in the exit. You could come round the first corner with quite a bit of speed because the boardwalk took you over the roots, but the next corner was really rooty.

The trail was really wet and I wasn’t sure whether to risk it in practice as it would likely dry up by race day, but I decided to give it a proper go. I came in and my front wheel slid in the second corner, throwing me over the bars down a rooty step. It was quite a big drop and I put my arms out. I knew right away that I’d broken my elbow.

EWS: You’ve had to deal with an elbow injury before. Do you think that past experience helped or hindered your mental outlook during the recovery process?

Ella: Yeah, I’d broken the other elbow a few years ago and I think having that past experience negatively affected my mental outlook. I didn’t have much of a support network back then, and I really struggled to come back from that injury. I guess I didn’t believe that it was possible to get back on a bike so quickly because last time had taken so long.

EWS: After such an outstanding start to the season, has it been hard to stay patient and take the time needed to heal properly?

Ella: It was really gutting because I finally felt like I was where I needed to be - at the pointy end of the EWS field. I went into the recovery process with the goal of being back on a bike in time for Whistler, but the thought of pushing my elbow too soon and doing more damage was horrible. To be honest, the hardest thing is staying patient now that I’m back on the bike.

EWS: Have you put yourself under any pressure to return to racing? What goes into making the decision to race?

Ella: First things first, I’ll need to feel strong enough to safely ride down all of the stages. I’ll get a pretty good idea of where I’m at strength-wise during practice. If my strength is ok, it’ll depend a little on how fast I feel. I’m not really interested in risking further damage for a mediocre result, so I’d rather give it another week than racing for a result I won’t be proud of.

EWS: We’re here in Whistler for EWS round four. What’s your goal for the week?

Ella: My ultimate goal is just to try and get back to that point that I was at at the start of the season, feeling happy and confident and having fun on my bike. Whether I get to that point in time to race or not doesn’t matter so much. If I’m feeling like that for the rest of the season after this round, that’s a pretty good place to be.

EWS: Finally, what’s the most important learning you’ve taken from the season so far? 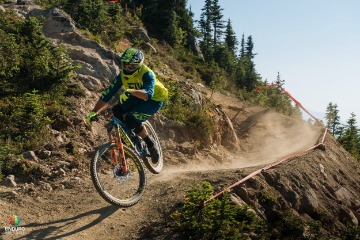 EWS Whistler is BACK! 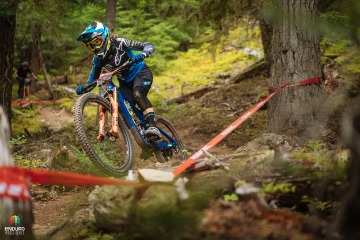 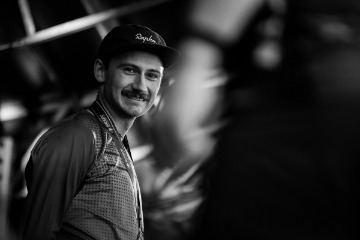 Innes Graham | The Road to EWS