If we were where we were supposed to be in 2020 by now, the launch of RockShox' all-new Zeb fork would no doubt be being hailed as a 'not so secret weapon' sprung straight from development and on to the front of various Enduro World Series pro's bikes to help them claw every available second from the stages. With this morning's global launch however, the new long-travel unit is now official and will have a buffet of alpine granite to look forward to at R1 in Zermatt at the end of August.

With three consecutive EWS crowns under his belt, there can be little doubting Sam Hill's credentials for being one of those who will be travelling the fastest over aforementioned chunky rock. The Australian was pivotal in SRAM's development efforts concerning the Zeb and so his long-time sponsors at Chain Reaction Cycles are perhaps more familiar with it than most:

Another rider who has also spent a large amount of time on the new Zeb is none other than Trek Factory Racing's Katy Winton. The Scottish racer posted her own assesment of the new fork on her YouTube channel:

You can watch RockShox-own launch video about how the new Zeb and its development, here:

One product alone is unlikely to make the difference when it comes to deciding who will walk away with the 2020 EWS crown but it is further proof at just how hard pro riders are pushing their bikes. You can learn more about the tech trends being influenced by the top-flight of enduro racing, here. 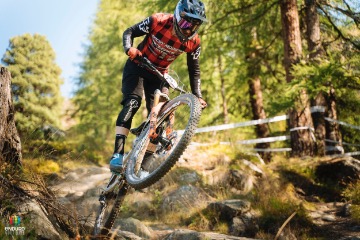 Miller, Gauvin, Melamed and a bear