The sixth round of the 2019 Enduro World Series, the CamelBak Canadian Open Enduro presented by Specialized, reached as dramatic a conclusion as you’d expect from the largest race in the history of the series.

Nearly 700 riders took to the start line high above Whistler on the iconic Top of the World trail, before descending more than 1500 feet and 11km of singletrack into the famous Crankworx finish corral. Saturday’s single race stage marked the first time the Whistler round had embraced a two day format - and stage one brought it with extra pressure as it served as the Queen Stage with extra series points on offer.

Isabeau Courdurier (Intense Mavic Cycling) stated her intentions straight out the start gate - winning her sixth Queen Stage of the season. The French rider didn’t have the easiest of races, with crashes and an injured leg seeing her win just two of the six stages - but it was enough to clinch the overall and her unbeaten record this season remains intact. Noga Korem (GT Factory Racing) put down an amazingly consistent performance, winning one stage and finishing within the top three on the other five to earn the second spot on the podium. Andreane Lanthier Nadeau (Rocky Mountain/Race Face Enduro Team) delivered a strong performance in front of her home crowd to take third.

In the men’s race Richie Rude (Yeti/Fox Shox Factory Race Team) also took the Queen Stage and the win - putting the hammer down on his rivals from the get go and leading the race throughout. Reining Champion Sam Hill (Chain Reaction Cycles Mavic) clawed back time on Sunday to end up in second, whilst Eddie Masters (Pivot Factory Racing) won stage two and finished the race in third.

In the U21 category it was the local talent that shone, with Canadians Lucy Shick and Jack Menzies taking the win in their respective categories. John Richardson and Evan Wall rounded out the men’s podium, whilst Isabella Naughton and Julia Long did the same in the women’s category.

In the Master Category Louise Paulin once again took the win, with Alba Wunderlin in second and Kirsty Stormer in third. In the men’s race Cedric Ravanel (Commencal Vallnord Enduro Racing Team) held off series leader and reigning Champion Karim Amour (Miranda Racing Team) to take the top step of the podium, Amour had to settle for second place with Spain’s Cesar Garain in third.

A strong performance from Rocky Mountain/Race Face Enduro saw them named Team of the Day.

The series now moves its attention to round seven and a brand new venue in the USA, for Northstar California EWS.

Full results can be found here 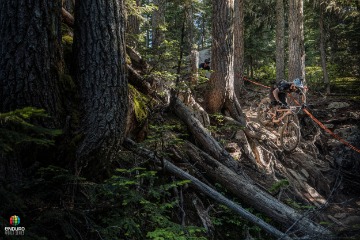 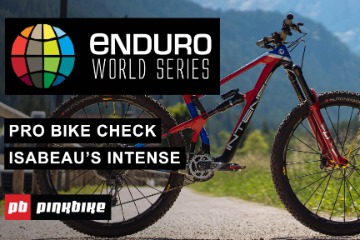